Two Simple and Basic Tie Knots: The Simple Knot and the Four-In-Hand Knot 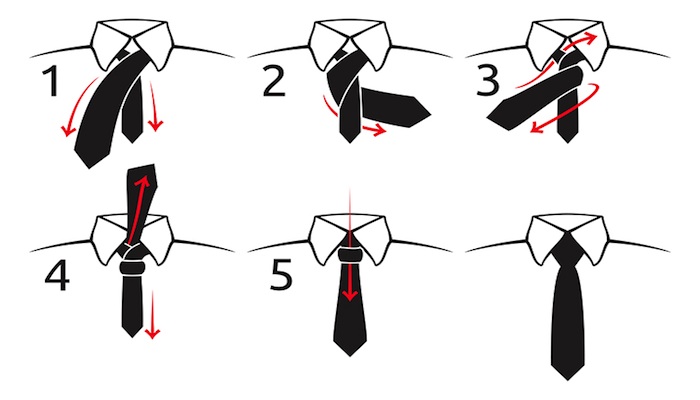 Learning the basics of tying ties.

What is the first thing that usually comes to mind when we hear the word ties? Is it a formal businessman in an expensive-looking suit with a briefcase in hand? Or is it a group of people wearing ties of the same design, as if they were part of a club?

We all have different perceptions when it comes to who uses ties and how and when they are worn. However, these days it is a common sight for sets of ties to be custom made for different organisations.

These organisations use these ties as a sort of uniform or part of their uniform, so their members can wear something that can represent the organisation they belong to. Probably the most common type of organisation that does this are schools and universities.

We have probably come across students wearing their distinctive school ties more than once. In fact, most schools in the United Kingdom have their students wear these ties, which have the school’s colours and sometimes even the logo woven onto it.

For lower school levels like elementary, these ties often come in pre-tied or clip-on designs for young children to have an easier time putting them on and taking them off. However, for older students like the ones in high school or college, self-tied ties are more recommended.

This is for the young adults to have some sort of training on how to properly tie their ties. That way, tying a tie can come as a natural thing for them when they become full grown adults. This applies to both males and females since there are now specially made ties for women.

There are a great number of tying methods for students to experiment on until they find something they are most comfortable with. To get started, here are two of the simplest and the most basic tying methods, and a step-by-step tying instruction:

This is also called the Oriental Knot and is known to be a knot that has the fewest possible steps and is the easiest to learn. It’s named that way because it is more commonly worn in China.

Step 1: Wear the tie over your shoulders with the backside facing outwards. Have the wide end on the right and the slim end on the left, and position the wide end slightly above your belly button. Since you will be mainly manoeuvering the wide end, this will also be known as your active end.

Step 3: Going right, move the active end across or over the slim end.

Step 4: From underneath, move the wide end up the main/neck loop.

Step 5: At this stage you have already formed a new loop, insert the active end into this loop.

Step 6: Pull down the wide end while sliding the knot up to tighten the knot and adjust the neck loop.

This is the most widely popular tie knot in both the Eastern and Western regions. This is due to its versatility and simplicity. It is also self-releasing, meaning it is easy to untie.

Step 1: Like the Simple Knot, the wide end has to be to the right and the slim end to the left. The only difference is that the backside has to now face inwards instead of outwards.

Step 2: Move the wide end to the left, over the slim end.

Step 3: Move the wide end to the right, under the slim end.

Step 4: Move the wide end to the left, going across the front of the slim end.

Step 5: From underneath, move the wide end up the neck loop.

Step 6: Insert the wide end down through the new loop.

Step 7: Pull down the wide end to tighten the knot, slide the knot up to adjust.

Practising these tie knots every day will quickly lead to mastery and maybe if they are interested, the students can experiment on more intricate tie knots like the Windsor Knot. It is all about mastering the simple ones first, so hopefully this guide helps.