Club Ties and Suits from the FA Cup 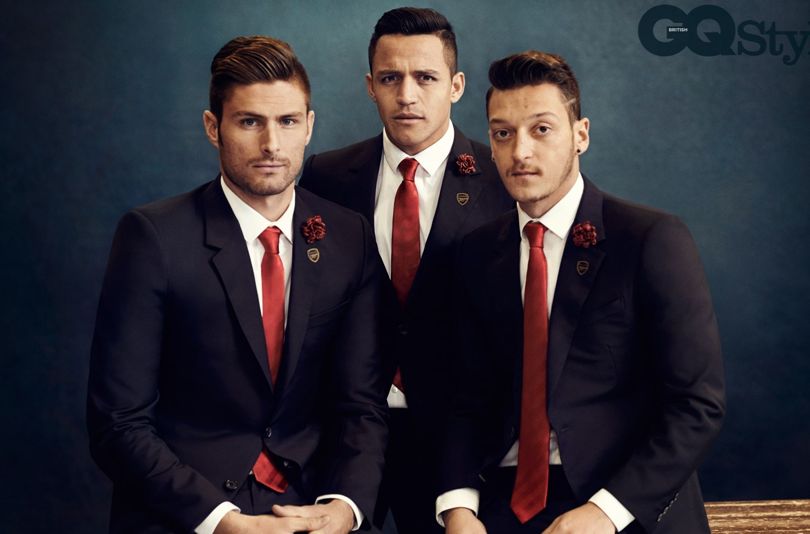 Football club ties and suits have come a long way in the past 20 years, so for this blog we have gone back in time to remember some of the best (and the worst!) FA Cup final looks. Football kits themselves are constantly evolving with the latest sportswear technology, as you would expect when the players are wearing them for every game. In contrast their smarter team outfits are often only seen at the FA Cup final, when the finalists descend on Wembley looking dapper (usually!) in their matching tailoring. From the infamous ‘Spice boys’ cream suits of the 90s, to the stylish designer get ups seen over the last few years, let’s take a look at the most memorable styles. 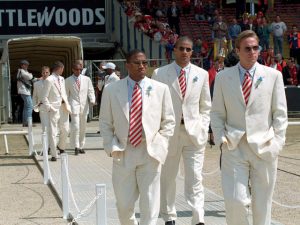 Who could forget those iconic (or should we say infamous!) cream suits donned by the Liverpool boys for the 1996 FA cup final? Apparently then goalkeeper, David James, used his contacts at Armani to secure these unique light coloured suits with matching ties featuring their team colours, red and white, in a striped pattern. 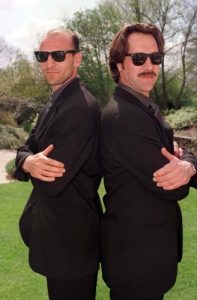 Looking arguably more stylish were the Arsenal team in their all-black get ups for their 1998 FA Cup final against Newcastle. What better way to accessorise their Hugo Boss suits than with matching dark sunglasses? 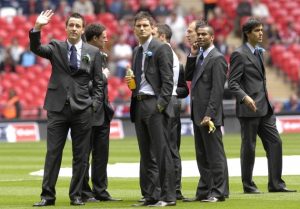 By 2007 suits were looking distinctly more modern, with the boys from Chelsea looking sharp here in their FA Cup final against Manchester United. Interesting to see their team logo printed onto the suits themselves- we personally prefer to see crests printed on our club ties instead.

The Lanvin-designed suits worn by Arsenal in 2015 were dapper enough to see them achieve a spot on the cover of GQ magazine; as well as the coveted FA Cup itself which they won in the final against Aston Villa. We like the subtle embossed stripe that was featured on their red ties. 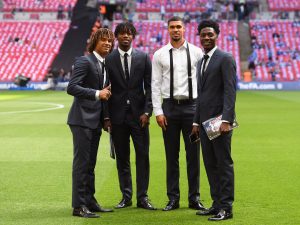 They might not have won the final but at the end of the 2017 season Chelsea showed everyone else how it is done in their sleek navy blue Dior suits. Their skinny ties were held in place by silver tie pins to ensure a stylish welcome at Wembley ahead of their loss to Arsenal.