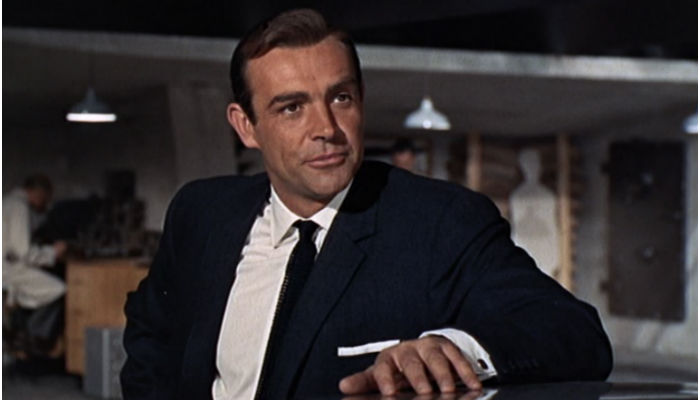 This season the knitted tie is fashion’s favourite. Compared to the bow tie and the standard that are the popular norms, the knitted tie is arguably an ambiguity. Sometimes, at a first glance, it may get confused with a smart woollen scarf. It is the tie that many people under a certain age  may not have heard of before, but it seems the knitted tie is attempting an epic comeback.

The knit tie is usually made from wool or silk and the material is woven together to form a tie. The shape is narrow, similar to the skinny tie and uniquely, the knit tends to have a cut-off straight bottom, this is known as the ‘bob tail.’

The Knitted Tie in the 60’s

The knit tie became notably popular during the 60’s. James Dean and The Beatles wore them.

Sean Connery’s 007 wore a silk knit tie whilst sipping a martini in Goldfinger (1964) and he also wears a blue version in You Only Live Twice (1967). 007 shows the cool casual and yet smartness of the knit tie fashion.

This season menswear has adapted a mixture of casual and cool styles. With the smart shape and casual material, the knit tie perfectly complements the current fashion trends.

The Knitted tie is fantastic for travelling, as it tends to stay crease free and it is also a great accessory for men who possess a simple attitude toward style.

Especially in the summer, the knitted tie is the perfect smart accessory for the warm months ahead.